This is a Flickr badge showing public photos from 07s6e. Make your own badge here. 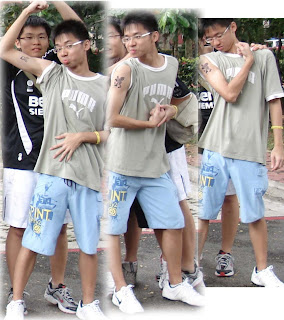 1. On 26th December 2006 (Boxing Day), David put on his boxing gloves given to him for christmas and flexed his pulsating biceps, sending ripples of shock worldwide and offsetting an earthquake of magnitude 7.2, a catastrophe that will surely go down in history.

2. His biceps weigh heavier than he himself.

3. Davids biceps are so big, girls are attracted to him because of the huge gravitational force it exerts.

4. Contrary to popular folklore and whatsoever, eclipses of the sun are caused whenever david flexes his biceps.

5. The peaks on his muscles are the highest point on earth after Mount Everest.

6. Several scientific measurements have been obtained and David's biceps have been proven to be actually bigger than his nose.

7. His badminton serve is 1000000 km/h, that he crushed some mountain a few weeks ago. He has now been barred from the badminton arena and has been dancing his

8. When NEO was still fighting the bad guys in MATRIX 1, 2 and RELOADED before he retired, he had a big nose. Now that he has retired, he STILL HAS A BIG NOSE. Rather, he uses his skill to breathe in more oxygen for his muscles to grow exponentially, thus achieving nirvana.